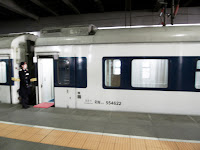 Ni hao oh good and patient readers. It is the forth anniversary of 'Aroundtheworldin80dinners'. I hope you've enjoyed our little journey around some of the more interesting restaurants in our area, as well as some of the more exotic locations I have visited. After all we don't want to get too parochial. So I thought we would end this travelogue with a journey. To save on airfares and to see something of the countryside, I decided to travel from Hong Kong to Beijing by train. Despite taking some 24 hours, it was a pleasant and intriguing trip, made all the better a fully functional and charming dining car that would put many stationary eateries to shame. 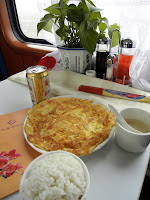 I lunched on a fine omelet, rice and soup as I watched the Chinese landscape flow by. I traveled without interruption, slept soundly in my appointed sleeping compartment and arrived in Beijing no more than 10 minutes behind schedule. 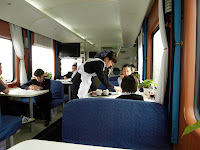 The service was immaculate. I can't remember ever seeing any attendant on a British train in a pristine uniform let alone a frilly pinny and a ready smile!
When I arrived home I asked for a ticket for the 20 minute service from the airport to Oxford Rd only to be told there was a replacement bus due to engineering works. Oh, the shame!
Posted by robert hamilton at 07:39 2 comments: 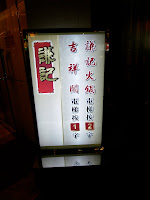 One of the highlights of my visit to Hong Kong was reacquainting my friendship with Teresa and Jessey, two of the esteemed guests at last year's 'Visible Secrets' film festival at the Cornerhouse (see Zouk). Teresa kindly took us to the 'Him Kee', a restaurant specialising in hotpot. 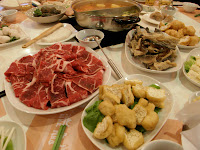 Those of us living in the north west or followers of 'Coronation Street' would think of Betty and the 'Rovers Return' but in Chinese cuisine it is a banquet of raw ingredients which you cook at the table in tureens of steaming broth. It was a great experience to which the act of cooking together added to the communal glow of the evening. 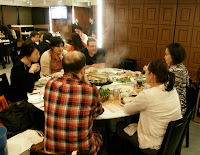 Of course that could have been down to the designated beer waitress, who was kept busy at our table, or at least my section of it. 'Maai fei fat' meal with 'maai fei fat' people. Ng gui Teresa, it was jan.
Posted by robert hamilton at 10:02 16 comments: 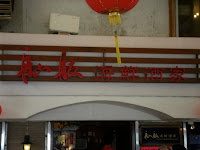 Continuing our travelogue food fest, Miss Sarah Perks and I moved from the Middle to the Far East, meeting Shivani and Andy on the way. We were off to the Hong Kong Film Festival, to meet some old friends, make some new aquaintances and to experience some of the finest Chinese food in the World....in China. 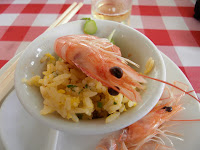 Sarah's brother, Chris and his family, Frankie, Petra and Omar, live on the delightful (and car free) island of Lamma, which is a short ferry ride from Hong Kong.On a sunny afternoon, we lunched on the waterfront at the 'Sampan Seafood Restaurant', lots of dishes (including prawns) and bottles of T'sing Tao shared in true Oriental style. 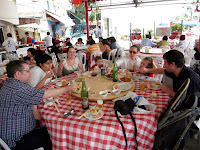 The company was joyful, the food was succulent and the beer, plentiful. As Sarah stayed to play Auntie to the endless energy of Petra and Omar, we thanked Frankie and Chris for their unending hospitality. Shivani, Andy and I sailed hotelward as the sun sank over the South China sea, a little drunk and a lot happy.
Posted by robert hamilton at 08:34 16 comments: 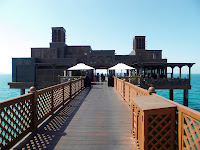 On our way to Hong Kong, Miss Sarah Perks and I stopped over in Dubai for 'Art Dubai'. Before our visit to the art fair, we had time for lunch- and a very special lunch it was too. We decided on 'Pierchic', not realizing the fabulous location or quality of the food and service. We were met at the entrance of the Al Qsar Hotel and driven to the restaurant in a golf buggy ( a first ever there was one) I understood the name when I saw that it was a chic restaurant on a pier! 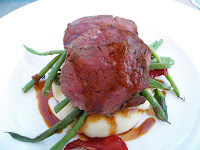 We lunched royally on a three course special. Shrimp salad, a tender seared beef and a chocolate souffle to die for, accompanied by a crisp Austrian white. 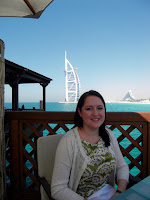 The food, the wine, the company, the weather and the view were all perfect. As we looked over the Arabian Sea, the iconic Burj Al Arab rose from the turquoise waters like a scene from 'Stingray' to remind me that experiences like this happen once in a life time.(....fade out to the strains of 'Marina, Aquamarina')
Posted by robert hamilton at 03:12 7 comments: 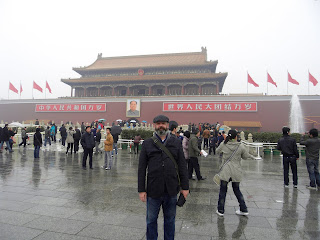 Ni hao dear readers. As you can see, I've been on my travels to China to consult with my colleagues at 'Aroundthewotldin80dinners' Global Headquarters in Beijing. We discussed, at length, future plans and projects for our ever popular site. I have also returned with some exciting posts for the many great restaurants I visited and fantastic dinners I ate. Needless to say, they will not count towards my 80 (aka 'red dotters') but they are good enough to provide my dear readers with your attention and time.
I've been away for the best part of a month and this has lead to some impatience on the part of some of our clients (yes, I mean you, Bob) but please bear with us and I promise it will be worth the wait. 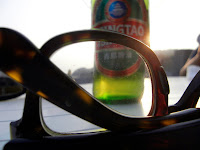 WARNING: Our comments page has recently been hacked by 'Ladies of the Night' sites in Chinese. We urge you to ignore these. They will be meaningless unless your Mandarin is as good as mine. (my little joke there).
Zaijian
Posted by robert hamilton at 06:13 1 comment: 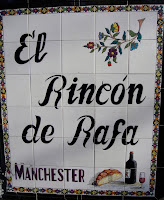 We at 'Aroundtheworldin80dinners'PLC, have come to the conclusion that a monthly post seems to be a regular and desirable outcome in these days of worldwide economic depression and global gloom. It is also sustainable (a trendy eco-word I know, but apposite here) given the task ahead. Further to this, we have decided that 80 dinners is not necessarily an attainable goal but rather (another trendy word) a benchmark. To redefine and redesign our mission statement, we have recalled Robert to our global headquarters in Beijing. He takes up the tale 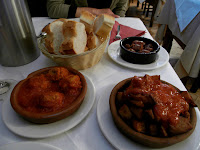 I know I've done Spain before, but Rafa's is firm favorite and a fantastic place for a late lunch with my good friend and cultural guide, Ying. We feasted fully on patatas bravas, meatballs, hake and chorizo which we washed down with a bone-dry rosado in true Iberian fashion. 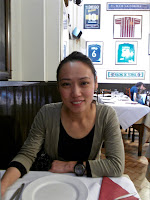 Ying (as ever 'hen hao kan') has an encyclopedic knowledge of Beijing and Hong Kong where my travels will take me in the coming month. Not only to our global headquarters, but also the China Film Archive, the Beijing Film Academy and the Hong Kong Film Festival. More of this on my return. My only regret is that Ying cannot come with me to enjoy the many good meals that await for she is a culinary companion and soul food mate.
Posted by robert hamilton at 05:10 5 comments:

Not so long ago, I had the enormous good fortune to work in Arkansas for a short period. Of all the great times I spent there, my Sunday at the resort of Hot Springs in the company of Beth, Jay, Beth-Ann and Trisha will remain with me. Hot Springs is a spa town, south of Little Rock, much favored by America's gangsters for the restorative qualities of its' waters. You can drink cocktails next to Al Capone's car in the lobby of the Arlington hotel. Another treat was dinner at Jason's.A Southern gem on the road to Lake Hamilton. 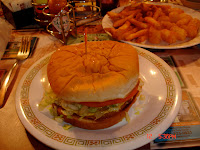 I had probably the finest burger this side of Scott's homemade cheese burger (another true Arkansas gem). Accompanied by Cat fish, hush puppies ( a small fried ball of dough, usually fed to fractious puppies), tatter tots and cajun fries, it was washed down with local brew, Amber Bock and American football on the TV. Sheer Southern bliss. 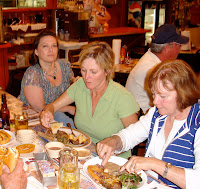 Trisha, Beth-Ann and Beth tuck in.

In the midst of life's everyday drudgery, God grants us a few days that will live long in the memory and this was one one of them. As I write, Beth is seriously ill and I pray that God grants her a full and speedy recovery so that there will be more days such as this.
Posted by robert hamilton at 09:31 1 comment: 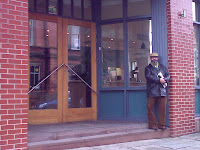 Happy New Year, readers and we at 'Aroundtheworldin80dinners' Global Headquarters, Beijing, wish you all a prosperous 2010- even in these difficult times. To gauge to extent of the downturn, we sent our Manchester agents (Robert Hamilton and Angie Atmadjaja) to Liverpool. Our understanding is that it is an area largely devoid of employment, with only football, the Beatles and the infectious Scouse humour to keep the wolves from the door.
Our agents reported that, although Robert remains immune to the humour, they found both culinary excellence and pockets of culture free from 'fab four'references. At the Bluecoat Gallery they viewed the sound installations of Janek Schaefer, then lunched at a new fusion eatery, Host. 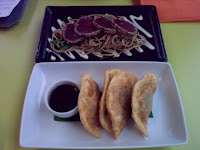 A tasty Indonesian chicken and shrimp rice was preceded by seared tuna and duck gyozas, and on a cold clear day, warmed up with glasses of tea. The interior was clean and modern, the service was as bright and breezy as the day. 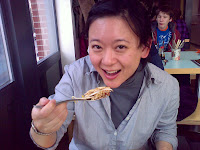 Angie commented that some of the fusions didn't quite fuse though we agreed that it flavorsome and filling. We took our leave of the port more cultured and fuller than when we arrived. Certainly better off than than the City fans who arrived as we left.
Posted by robert hamilton at 08:23 1 comment: