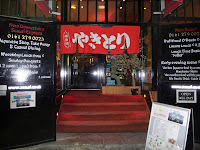 On a bleak Friday night, an early winter chill blows through the mean streets of Manchester carrying Aureja and myself to a pre-theatre meal at the New Samsi. I'm not much of a one for the pleasures of Thespia, not enough car chases for my taste, but Stella was starring as the Sixties icon 'Nico' at the Lowry and I had promised to go. Aureja had volenteered to accompany on such a rare and potentially hazardous cultural outing and as such deserved an early bird treat. I know I've done Japan twice but Samsi sells Tokyo street food such as yakimono skewers as well as all the standards.

The food was excellent as was the conversation and company, followed by Stella's moving performance as the tragic German
singer. 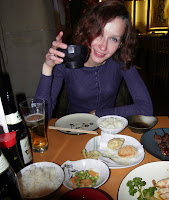 After the theatre, we warmed ourseleves with mulled wine at, given the weather, the aptedly named North Pole. This has been relocated next to Urbis for, I can only guess, seasonal convenience. To my companion on such a cultured evening I would like to say, 'Sveikata'.
Posted by robert hamilton at 03:54

Off to see Iris Gill and Angela in Dec...Want to come ?

I know its not strictly within the bounds of the M60 but should be a good night out !