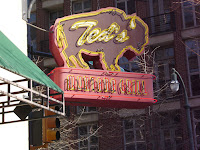 Well, chums, it's been some time since my last post and this is only a taster in that I'm still stuck on number 40. I've moved flat, started a new term and am preparing another visit across the pond, this time to Arkansas. Reports of this on my return no doubt. On my last trip I had an unscheduled stopover in Atlanta due to an act of God. According to Delta check-in, this meant I could bill he-who-art-in-heaven for my hotel. He also blessed me with the travelling companion from hell for the duration of my enforced stay in what is, normally, a fantastic city. Discretion (and my therapist) prevents me from giving out any futher details.
Ted's is part of the Ted Turner empire, which includes CNN, the Atlanta Braves and a heavy investment in large parts of Jane Fonda (which failed to turn a descent profit). He also owns a large ranch where he breeds Bison- which leads me neatly to the food at his Montana Grill. 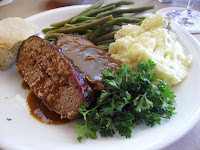 I lunched on a moist Bison meatloaf and washed it down with several glasses of a fine New World pinot noir to ease the pain of the unwanted company of the witch sat across the table. Back at the Airport, I fled to a waiting connection to Paris, leaving the witch demanding immediate transportation direct to Manchester. They should have given her a broomstick.
Posted by robert hamilton at 07:39