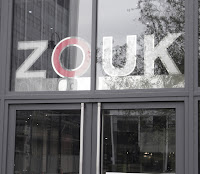 It's been a busy month for us at 'Aroundtheworldin80dinners' Global Headquarters, Beijing (Manchester Branch). We offer a Gold Standard Cultural Ambassador Service to other institutions. As part of the 'Visible Secrets:Hong Kong Women Filmmakers Festival'at the Cornerhouse, I was engaged to provide both my culinary and filmic knowledge to the visiting dignitaries. This meant many galas and premieres as well as the many celebratory dinners that attend such functions. Although, I suspect my actual duties didn't go beyond that of court jester. 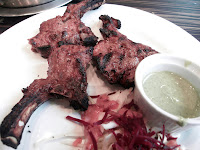 One magnificent function was held at 'Zouk', a relatively new Asian restaurant and grill, serving tasty treats such as the succulent Tandoori chops 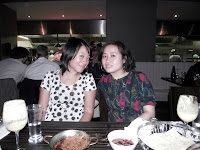 The occasion was to honour our esteemed guests from Hong Kong, Ivy Ho, Teresa Kwong and Jessey Shan. Both Ivy and Jessey gave us the pleasure of hosting the western premieres of their new films, "Claustrophobia"(Ivy Ho,2009) and "Lovers on the Road" (Jessey Tsang Tsiu Shan,2009) and both were excellent. Teresa showcased the marvelous 'Hong Kong Short Film Festival' that she runs and which I hope to attend one day.
The festival is now over and our guests have returned home, hopefully with many good memories and many new friendships. To them I say 'Ng Gui', you were 'Jan!!'.I ,too, returned home to find a strange fire breathing dragon in my kitchen- then I remembered, it was a cooker.
Posted by robert hamilton at 07:00