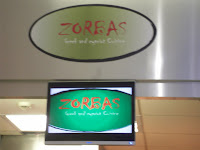 On my way to the cinema to see 'Blood, the Last Vampire', which according to the Guardian was 'Japanese school girls with swords fight vampires', the hunger struck. I stopped at a newish Greek Cypriot stall at the Arndale Food hall called 'Zorba's'. Now I'm old enough to remember the film with Anthony Quinn and Alan Bates, and that famous dance on the beach. 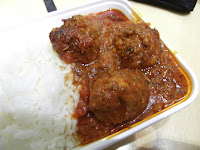 While lazily grazing on kefthes and rice (and wondering if there was a Turkish Cypriot restaurant- answers on a postcard), I realised this was a rare thing for a film historian and food lover, a film\food franchise. The only others I could think of were 'Tampopo' and a small take-away in north Manchester, 'The Omar Shariff'. I began to think of possible others-'Good bye Mister Chips', a health-conscience chippie or 'Hamberger Hill', a war themed fast food place with staff dressed as Rambo or, my personal favourite, '101 Dalmations', a Korean bosinting (dog stew) chain.

Someone said that life was all disappointment then you die-well there was only one school girl with a sword and Zorba was from Crete.
Posted by robert hamilton at 03:20